Mutant characterization for the development of next-generation medicines

Epidermal growth factor receptor (EGFR) was used as a model receptor to demonstrate the spectrum of applications of the ebBRET based biosensor platform in studying RTK biology and pharmacology. EGFR is part of the ErbB receptor family that also includes HER2, HER3, and HER4. The ErbB family of peptide growth factors comprises seven members: EGF, transforming growth factor-α, amphiregulin, betacellulin, heparin-binding EGF-like growth factor, epiregulin, epigen, and the neuregulins.

All EGFR ligands are synthesized as transmembrane precursors that undergo extracellular domain cleavage to release soluble ligands, which then bind to and activate EGFR through favoring receptor homo- and/or heterodimerization. Interestingly, binding of different EGF family members to the same receptor has been reported to stimulate different biological responses (that is, biased signaling).

EGFR is involved in key biological processes, and its deregulation is associated with the development of many cancers. Moreover, mutations of EGFR have been described to affect receptor signaling and to be responsible for the appearance of drug resistance during treatment in clinical settings. Herein, we demonstrate how ebBRET biosensors were used to characterize and differentiate the signaling signatures of two EGFR ligands: EGF and epiregulin. Real-time studies of plasma membrane and early endosome recruitment of the SH2(PLCG1) biosensor that is, the biosensor based on the SH2 domain of phospholipase C-γ1, highlighted how the RTK biosensors permit agonist signaling kinetics to be discriminated on timescales ranging from milliseconds to hours. 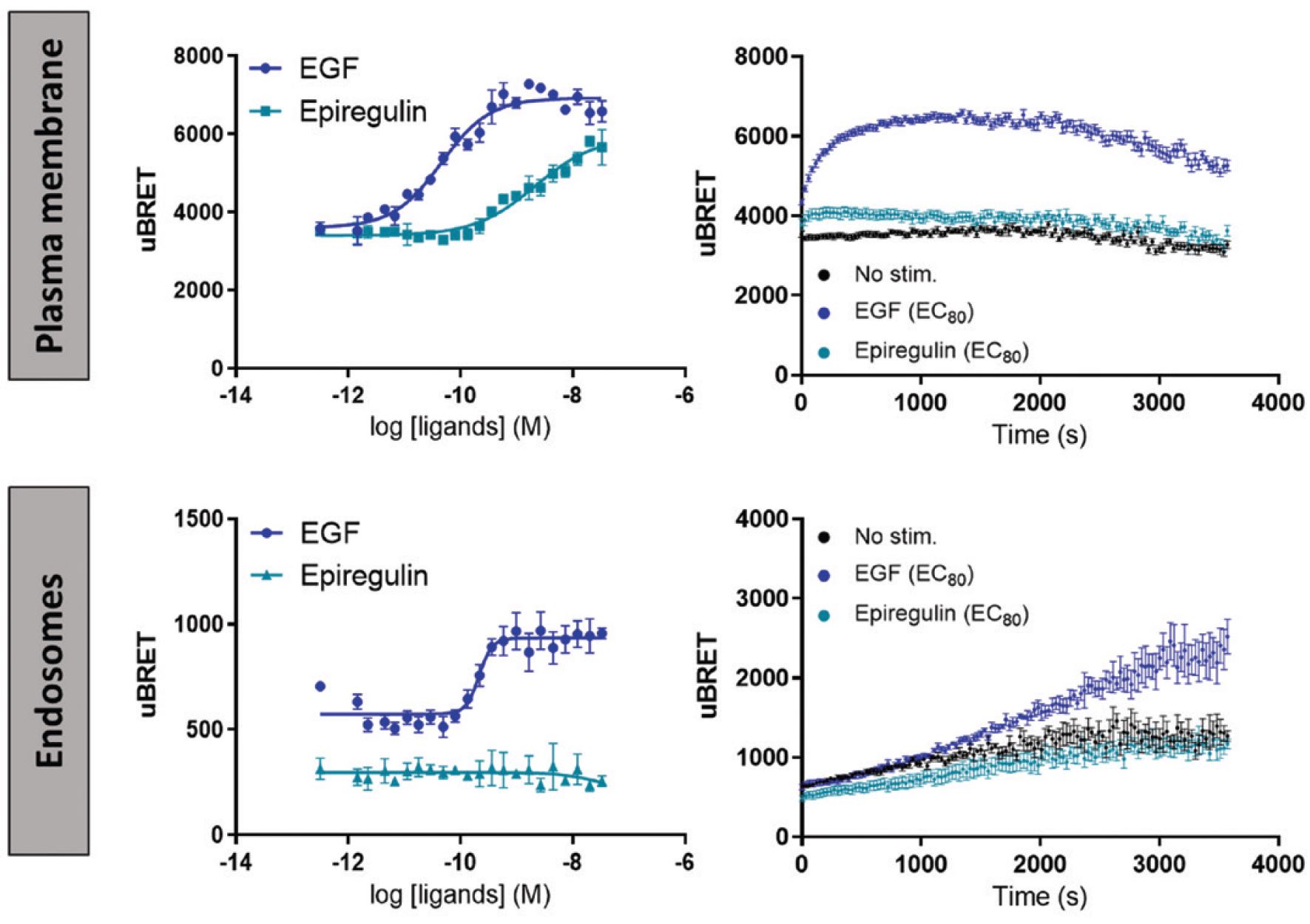 Mutant analysis for the development of novel TKIs

Currently, EGFR is specifically targeted in different types of cancer using tyrosine kinase inhibitors (TKIs) and monoclonal antibodies. Therefore, the inhibitory effects of different TKIs were assessed with wildtype-EGFR (EGFR-wt) and two EGFR mutants (EGFR-T790M and EGFR-C797S), prevalent in non-small cell lung carcinoma (NSCLC). These acquired mutations are known to arise during treatment with first- and third-generation EGFR TKIs. Initially, we monitored the real-time recruitment of the SH2(PLCG1) biosensor to the plasma membrane following stimulation of EGFR-wt and mutated receptors with EGF. Reversal of effector engagement upon addition of the first-generation TKI, gefitinib (Iressa®), or the third-generation TKI, osimertinib (Tagrisso®), was then investigated. Interestingly, different kinetics of inhibition between the two TKIs were observed on EGFR-wt with gefitinib displaying faster inhibitory activity (maximal inhibition within 60 s) compared to osimertinib (maximal inhibition at 5 min). Furthermore, gefitinib reversed the activity of EGFR-wt and the EGFR-C797S mutant but was ineffective on the EGFR-T790M mutant (Figure below). 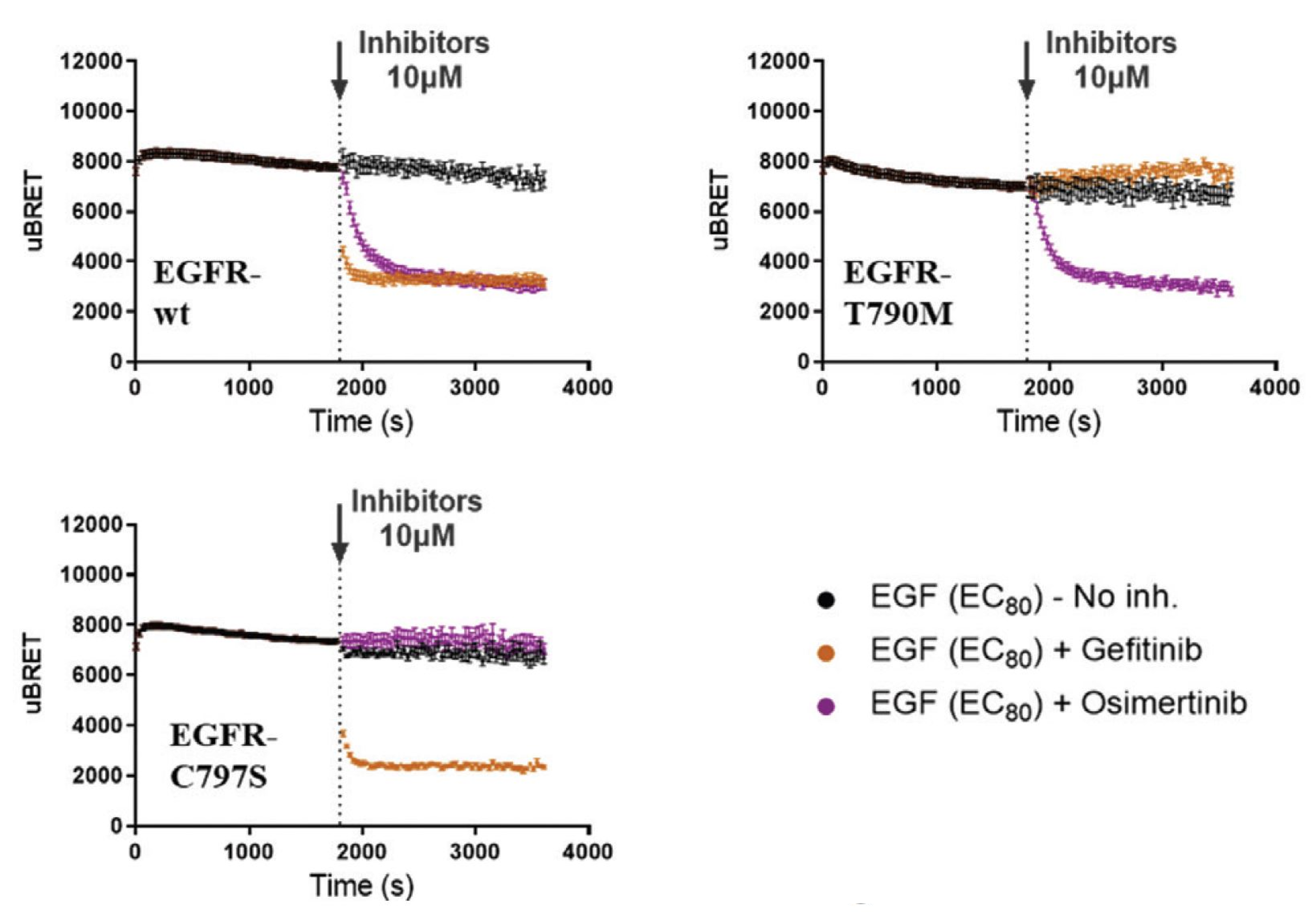 The RTK biosensor platform allows us to differentiate the impact of different TKIs on various RTK mutations. This work highlights the platform’s capacity to be exploited as a tool to develop next-generation TKIs effective against RTK variants.