All of our technologies are designed with the same underlying goal: improve drug discovery by bringing new insights on transmembrane receptor’s proximal signaling transduction, without interfering with the structure of these receptors and effectors.
Both aspects are crucial for the development of next generation therapeutics based on a better and deeper knowledge of the receptor’s intrinsic intracellular events.

At the heart of Domain Therapeutics’ technology pipeline is the bioSens-All® platform of ebBRET sensors for the study of G protein-coupled receptors (GPCRs).

The importance of GPCRs

GPCRs constitute the largest family of cell surface receptors in the human genome with more than 800 different members. Due their involvement in nearly all physiological and numerous pathological processes, GPCR serve as prime therapeutic targets.

In fact, it is estimated that 34% of all FDA approved drugs act on this family of receptors. It remains that only 16% of all GPCRs have been successfully targeted, resulting in broad untapped therapeutic potential for this family of receptors.
At Domain Therapeutics North America, we aim to enhance GPCR drug discovery by exploring the pluridimensionality of GPCR signal transduction, thanks to our bioSens-All® technology platform.

About the GPCR bioSens-All® technology

Thanks to a complete set of ebBRET-based biosensors (figure 1), we aim to leverage the GPCR drug discovery potential.

Upon activation by a given ligand, GPCRs will trigger various signaling pathways, in a ligand-specific manner, revealing a “signaling signature “.

Unlike classical distal readouts, such as cAMP or Ca2+, used to determine the response of a receptor to a given ligand, our panel of ebBRET biosensors brings new light to receptor-proximal signal transduction events following GPCR activation.

This information can be used to launch a screening campaign to identify a ligand with a specific signaling signature (figure 2), or cluster compounds to determine which signaling signatures generate the safest and most efficacious in vivo effects based on our understanding of the biological outcomes of triggering certain cellular pathways. Collectively, the bioSens-All® technology aims to guide scientists with comprehensive profiling of their GPCR of interest and support their drug discovery programs

The bioSens-All® technology has been used to correlate receptor proximal signaling events at the plasma membrane with in vivo biological effects and clinical adverse events. More importantly, ligands that do not trigger signally pathways associated with a negative clinical outcome have been successfully profiled as demonstrated in the example with the Niacin receptor (HCAR2, GRP109a).

It is well established that a single amino-acid modification can modify a receptor’s biology, leading from partial to total loss of function on several signaling pathways. A very distinctive and important aspect of the bioSens-All® technology relies on the fact that neither the GPCR nor its direct effectors are modified or tagged (except for Gαs and β Arrestin biosensors). This ensures that the receptors are expressed in their physiological conformation, and the signaling pathways activated are not altered by any structural changes.

Moreover, the ability to work with unmodified receptors and G proteins combined with the sensitivity of our ebBRET technology offers numerous advantages. First, it allows for the detection of endogenous GPCR signaling in physiologically relevant cell lines. Further it allows, in cells expressing sufficient endogenous level of the receptors and G proteins of interest, to detect G protein activation with native components. We can therefore get even closer to unaltered physiological conditions by not overexpressing the receptor, working with cells naturally expressing the GPCR of interest to study its biology in the most physiological way.

Finally, the high sensitivity of our system can be used to detect inverse agonists, by measuring the receptor’s constitutive activity level and its potential reversal by a given binder.
Overall, the fact that this technology keeps the GPCRs and effectors untagged is a crucial advantage in order to draw comprehensive and reliable conclusions from this signaling data.

Being aware of a ligand’s signaling signature, whether it’s a small molecule or a biologic, can really make a difference for the development of novel therapeutics.
The quality of information provided by the bioSens-All® technology can be a crucial at different levels:

Each of our ebBRET biosensors can be monitored in real-time, and in various intracellular compartment. This feature brings another level of analysis that can be leveraged. Since two different ligands might have similar signaling signatures from an endpoint readout perspective, but a completely different kinetics of activation translating into different physiological effects, real-time analysis can be particularly helpful to discriminate ligands, and get a better understanding of their respective functional effects.

With a better understanding of a ligand’s signaling signature comes the capacity to precisely design a drug in order to activate certain pathways, while inhibiting others. This concept called “bias signaling“ is crucial and might leverage new drug discovery potential, enhancing a drug’s and receptor’s therapeutic potential, while inhibiting its side effects.

Classically, GPCRs have been considered as binary signaling switches existing in equilibrium between “on” and “off” states. In this view, ligands are classified as agonists, inverse agonists or antagonists depending on their overall effect on this equilibrium (i.e., agonists shifting the equilibrium to the on state and inverse agonists shifting the equilibrium to the off state). Two key complementary discoveries in the last decade, namely pluridimensionality of signaling efficacy and biased agonism [2], have revolutionized our understanding of GPCR biology and the pharmacology of ligands targeting these receptors. Contrary to the classical view of GPCR signaling, it is now evident that these receptors can exists in multiple active (i.e., “on”) states [3] and engage multiple (potentially crosstalking) downstream signaling cascades by directly coupling to both heterotrimeric G proteins and non-G protein effectors (i.e., β-arrestins). Further, a given drug acting on a receptor can display different (sometimes reversed) efficacies towards the various pathways coupled to the receptor is described by the concept of bias.
Drug efficacy is thus considered to be a pluridimensional parameter. An extension of this observation agonism (or functional selectivity), which posits that structurally dissimilar ligands can stabilize unique receptor conformations with each conformation differentially coupling to downstream effectors. Accordingly, different ligands of a given receptor may impart distinct signaling signatures and biological properties to the receptor. The promise of biased agonism lies in its applicability for the development of GPCR ligands that selectively engage therapeutic pathways while inhibiting or remaining inert towards those producing deleterious outcomes. Ultimately, biased ligands may display superior therapeutic profiles in many disease areas and indications.
In this application note, we demonstrate how bioSens-All® biosensors were used to characterize and differentiate the signaling signatures of endogenous and synthetic human parathyroid hormone 1 receptor (hPTH1R) ligands (i.e., parathyroid hormone (PTH) and Tyr1-PTH, respectively).

More information on bias signaling with the example of PTH1R receptor

Although GPCRs serve as prime therapeutic targets, with 34% of all FDA approved drugs act on this family of receptors, it remains that only 16% of the GPCRs are targeted. More than 100 GPCRs are still orphan, which means no known ligands have been discovered. Consequently, the pharmacology and signaling attributes of these GPCRs remain inaccessible, as endogenous or exogenous modulators have not been discovered.
The bioSens-All® technology can help tackle orphan GPCRs in two distinctive ways:

The first strategy relies on the capacity of the technology to detect ligand-independent, or constitutive, effector coupling. Constitutive activity is now widely accepted as an intrinsic feature of GPCRs, and it has also been observed in in vivo studies (Damian et al., 2012; Corder et al., 2013). Such constitutive activity upon overexpression of a GPCR can be used to identify the effector pathway involved in signaling by a given orphan receptor, thus mitigating the need for an agonist compound. In this approach, a receptor is overexpressed to various degrees and readouts are obtained on multiple pathways, as shown in the figure below.

The second deorphanization strategy consists in combining our Gz and G15 Biosensors.
We have recently completed analysis of G protein coupling for 100 GPCRs. This work revealed that 95% of these receptors activate Gz and/or G15 (Figure 6). Hence the creation of a sensor that is capable of simultaneously measuring activation of both pathways would provide a powerful and almost universal sensor that can be used for deorphanization purposes. Further, this sensor can be applied towards drug screening, safety and systems pharmacology studies. 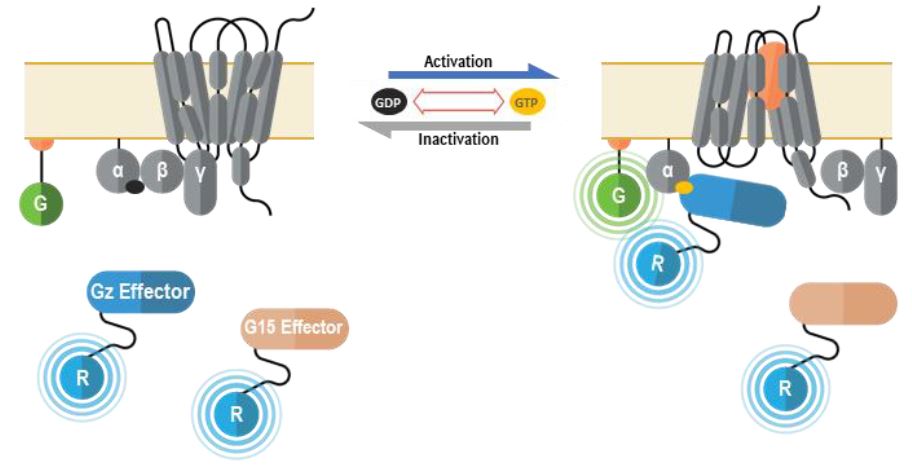 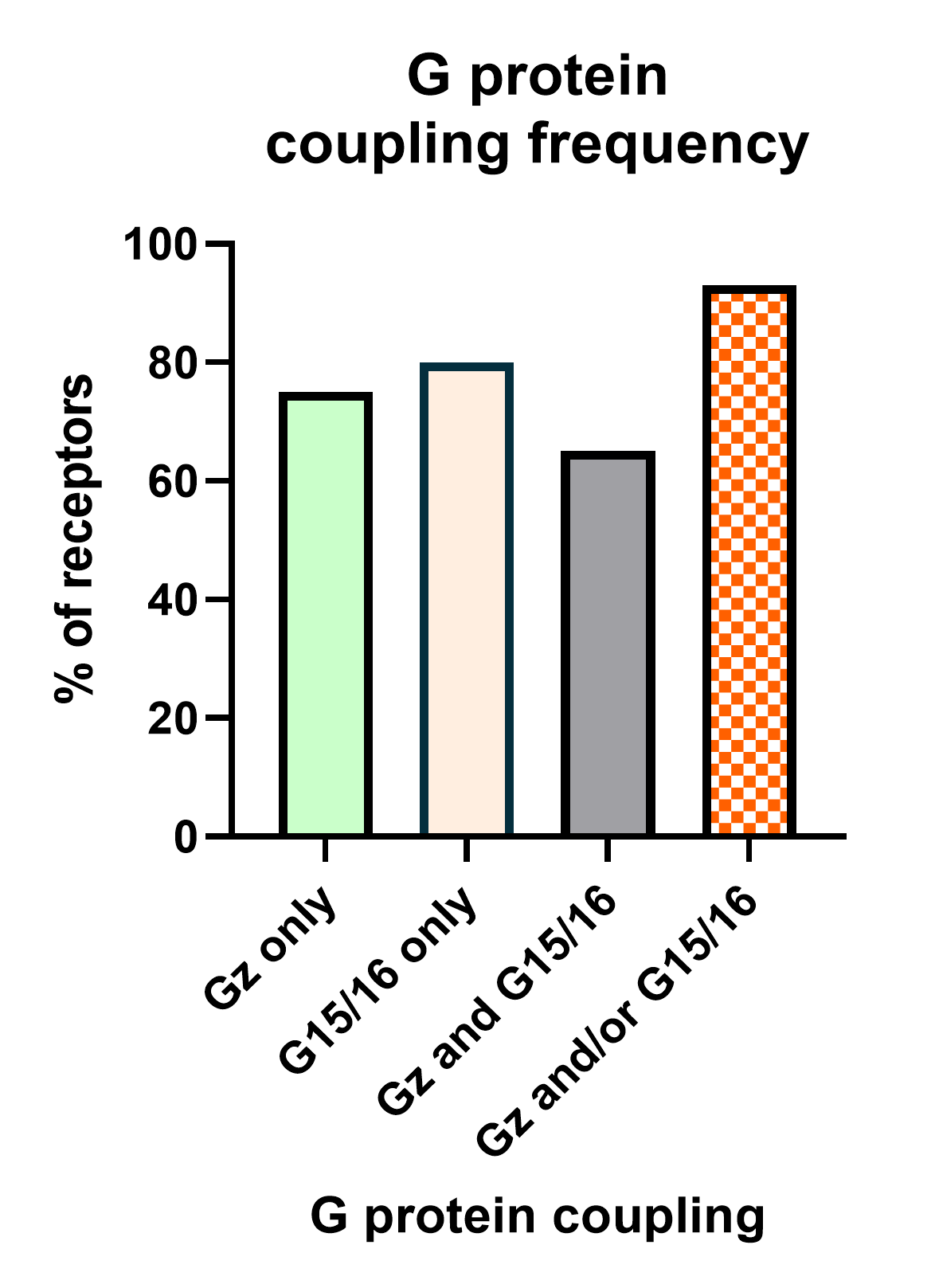 On the other hand, it can be used to detect inverse agonists, by measuring the receptor’s constitutive activity level and its potential reversal by a given binder.

The magnitude of this ratiometric BRET value is primarily governed by the relative orientation and physical proximity between the donor and acceptor proteins (i.e., the closer the donor and acceptor proteins, the more efficient the energy transfer and thus, the greater the BRET signal). BRET typically occurs in the 1-10 nm range (10-100Å). This spatial range is comparable with the dimensions of biological macromolecules and correlates well with most biological interactions, thus making BRET an ideal system for live-cell  monitoring of macromolecular interactions and conformational changes. 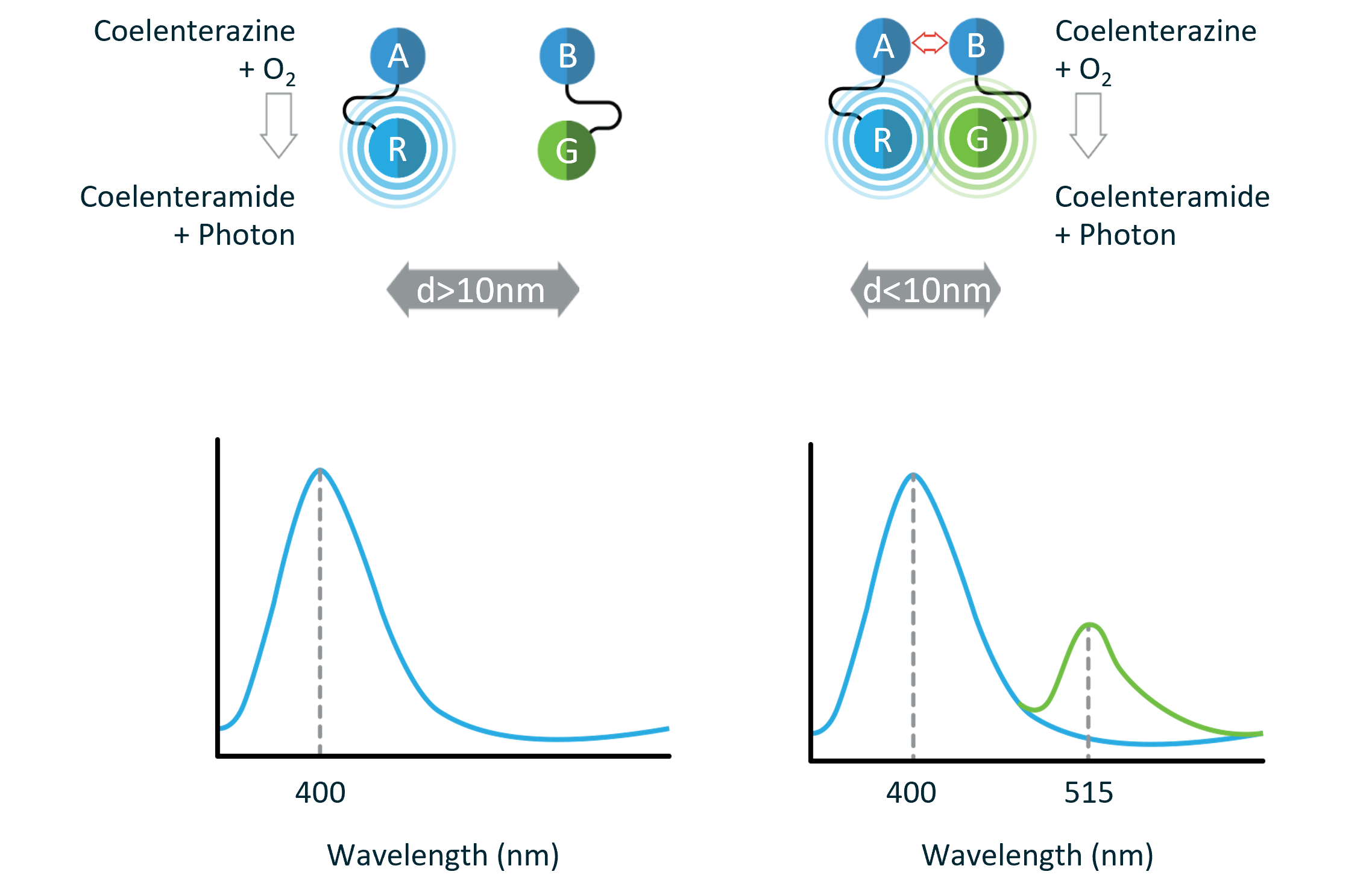 These biosensors are designed to measure:

Biosensors at the heart of the bioSens-All® platform are constructed using different strategies . These biosensors can be broadly divided into the following functional categories:

These multimolecular sensors were designed to monitor the conformational changes that occur within the heterotrimeric G protein complex upon Gα activation and effector interaction. They can be used to measure specific activation of each Gα subtype.

More information on the GABY biosensor

These multimolecular sensors detect plasma membrane recruitment of an effector protein that interacts with Gα subunits upon G protein activation. They can be used to measure specific activation of each Gα subtype.

More information on the GAPL biosensor

These multimolecular sensors detect the recruitment of ß-arrestin 1 or ß-arrestin 2 to the plasma membrane following receptor engagement.

A similar strategy is available to detect ß-arrestin recruitment to early endosomes.

More information on the Beta-arrestin biosensor

These unimolecular biosensors are used to monitor conformational changes occurring within β-arrestins 1 or 2 upon GPCR activation.

This multimolecular biosensor detects the generation of DAG at the plasma membrane following receptor activation.

More information on the DAG biosensor

More information on the cAMP biosensor

This multimolecular biosensor detects the generation of PIP3 at the plasma membrane following receptor activation.

More information on the PIP3 biosensor

This multimolecular sensor detects ligand-induced activation of the small G protein RhoA at the plasma membrane.

More information on the RhoA biosensor

This unimolecular biosensor serves to detect the activity of protein kinase C (PKC).

More information on the PKC biosensor 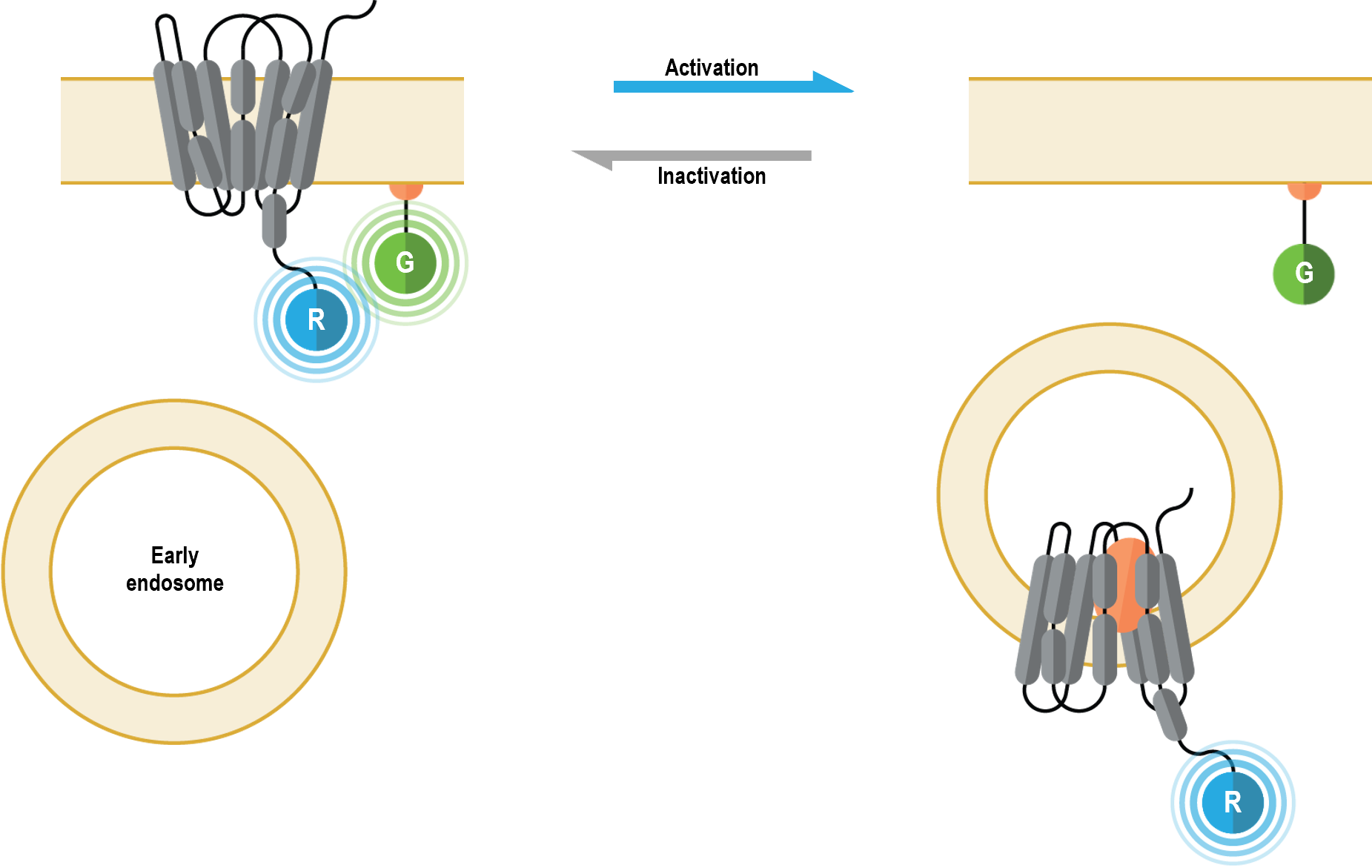 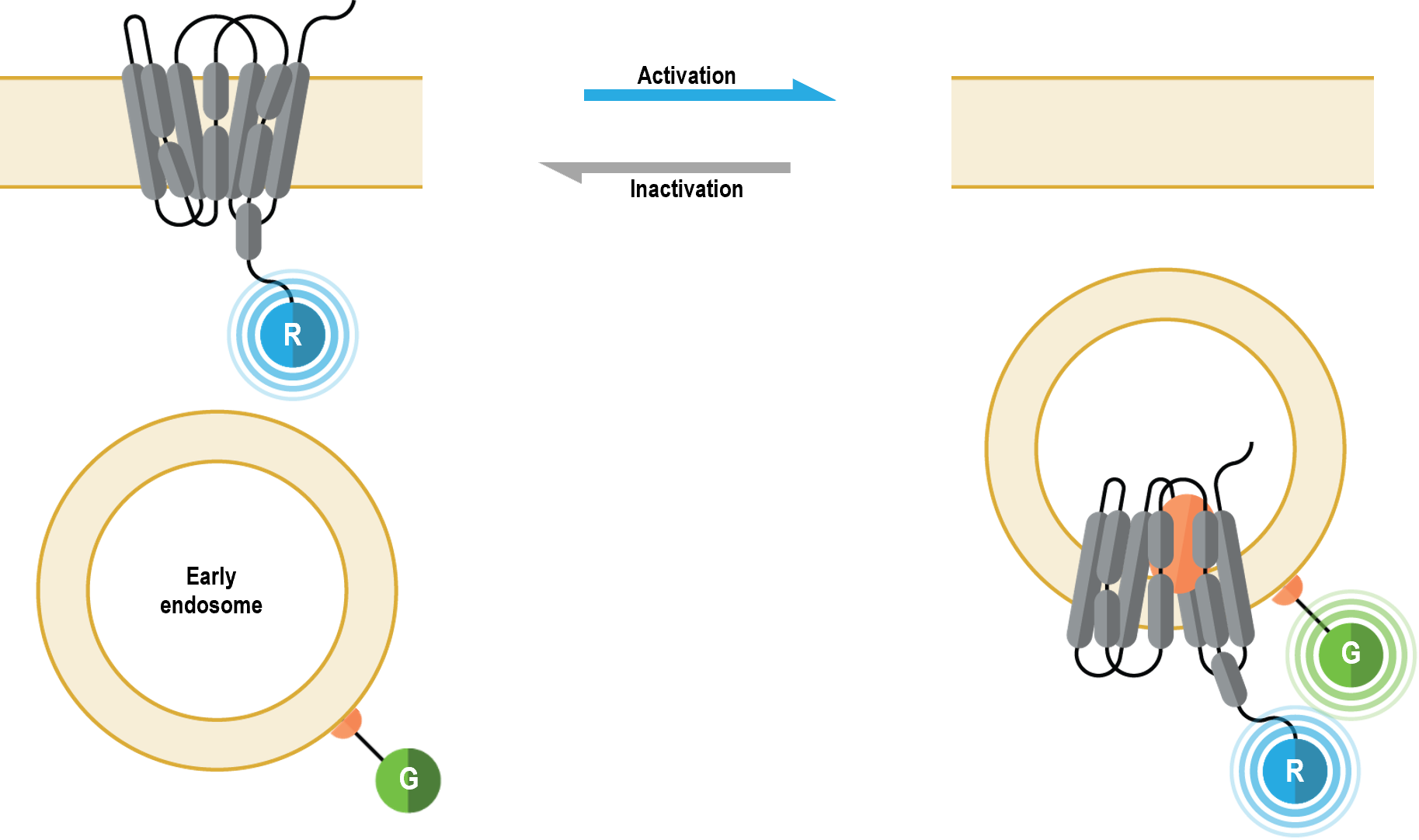 bioSens-All® is a highly dynamic and flexible platform that can be easily adapted to address all your questions and needs.The assay has been successfully used with ligands of diverse biochemical nature (i.e., small molecules, peptides, biologics). All applications of this technology are based on the following basic protocol and are compatible with 96- and 384-well plate formats.

To date, a total of over 100 wildtype GPCRs and more than 2000 variant GPCRs have been either fully or partially profiled using bioSens-All® technology. For numerous receptors, the signaling signatures of multiple ligands have been defined.